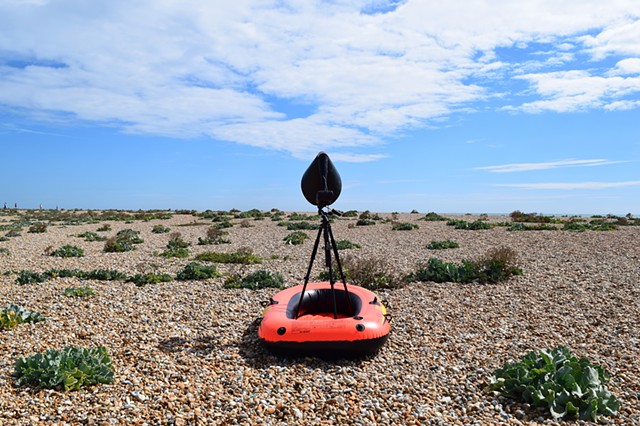 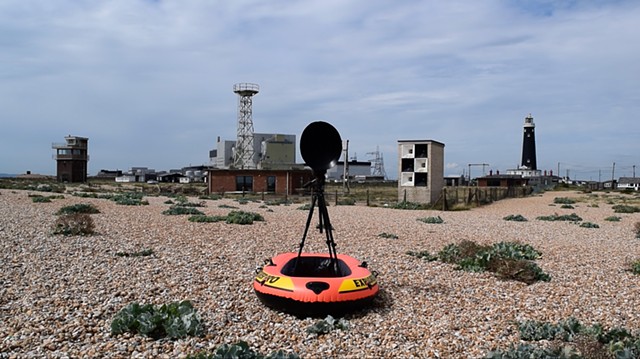 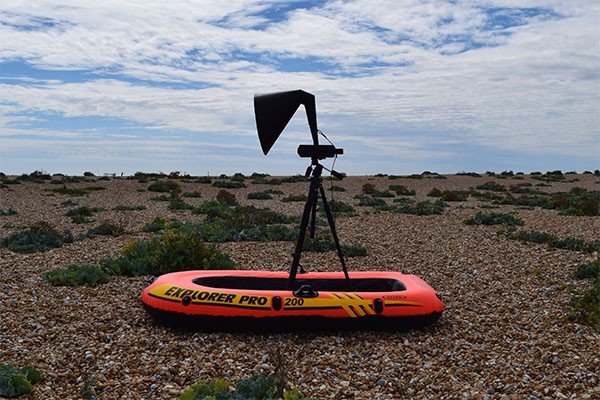 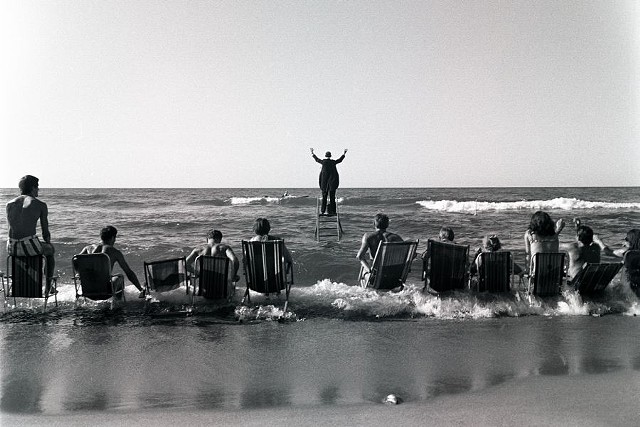 Panoramic Sea Happening (After Kantor) is a film that reimagines part of Tadeusz Kantor's original sea happenings from 1967 in a landscape in which the sea has retreated. The conductor of Kantor’s original performance is replaced with a sound object cast adrift on a beach in Dungeness (UK). The object plays back the sound of the sea into the landscape, which was performed live and then filmed from three distinct angles. The first angle mimics the position of the conductor in Kantor’s original happening, facing outwards into the horizon of the beach and recalls the image in Kantor’s work of a human figure undertaking the absurd task of orchestrating the sound of a gigantic expanse of water. The second angle exposes the machine itself and the large cone that amplifies the sound, reinforcing the isolation of the object. The third angle reveals a decommissioned nuclear power station and sound objects used as a warning system for the power plant.

Dungeness is a location where the sea has been retreating from the land, leaving traces of human activity through the disused boat winches, abandoned cabins and the decommissioned nuclear buildings. It is a place in which the footprint of the anthropocene is keenly felt. The sound object is intended to act as an anthropomorphic figure, ghosting the original conductor and offering the sound of the sea back into the landscape through a wide mouthpiece, echoing Kantor’s own load hailer in the original sequence of sea happenings. It speculates on Kantor's theory of the bio-object, which proposed a symbiotic relationship between the human and the nonhuman object in performance, as a possible instrument to access a form of geologic imagination. In this configuration, the human itself is absent, but is evoked through the objects left behind. The sound object, helpless in a red dingy, might be thought of as a co-conspirator with the viewer, enabling a looking back to the past in a landscape of an inevitable future.

Screen Based Video Installation. The work was originally commissioned by the University of Kent in collaboration with the Polish Cultural Institute for the Symposium Kantorbury Kantorbury in Canterbury (UK) to mark the 100 years since Tadeusz Kantor’s birth. 7 minute. Various Dimensions.2015.